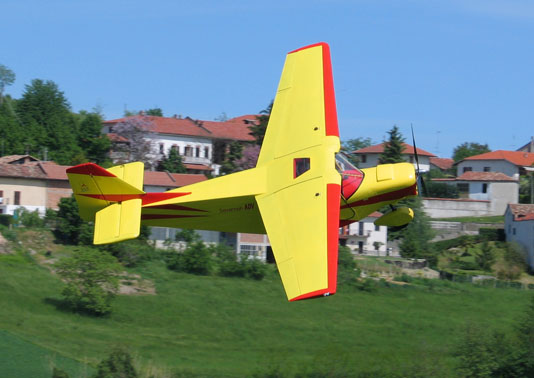 The Savannah™ ADV was born from the idea to join together in a sole aircraft the possibility to make extremely short landing and have high cruising speed. The system, fully planned and produced by I.C.P., permits through the activation of a button, the leaking out of generous high-lift from the wing profile. These are interlocked to avoid the leak out from only one side. Certified LSA in the United States and in Australia, this aircraft is planned for a maximum takeoff weight of 560 Kilograms. It is sold with engine Rotax 912S (100hp), electric variable pith prop, lights of navigation and strofe on the wings, fairing wheels, trim with electric control on the elevator and led indicator of position, intercom, 2 headphones, radio predisposition and others accessories. Description ↓

– The Savannah™ ADV is a monoplane type, with two side-by-side seats, fitted with a high wing supported by struts. – The wings are trapezoidal with aerodynamic profile NACA 23015, provided with twist and dihedral and its lift system consists of slats on the leading edge and double-slot flap on the trailing one. – The slats slide on 4 ways operated by the same amount of levers, which are handled by a torque tube. – The horizontal empennage is tapered and it consist of a fixed stabilizer and a moving balancer. Both the fixed part and the moving one are carried out in two half planes. The left balancer is provided with trim wing and motor located in the front housing of the elevator with position indicator.

– The two large lateral doors allow an easy independent access to the cabin. – The visibility has been improved thanks to a new lexan window in the lower part of the door. – The cockpit is completely sound insulated, with lining in upholstery, canvas or fitted carpet. – The seats are in skin or in upholstery or in canvas and side by side type. – The luggage van, situated behind the seats and accessible during the flight, may contain up to 45 lbs (20 kilograms) – It’s possible to improve the cabin ventilation by using two rotating air scoops in the doors windows. – Heating system with control on the dashboard. – Cabin light.

– The aircraft is equipped with engine Rotax 912 ULS 100 Hp – The engine cowling is completely removable to permit an easier engine van inspection. – The propeller is a Duc three-bladed with fixed pitch or an Ivoprop three-bladed with variable pitch in flight (optional). – The fuel system is provided with an additional electric pump shielded anti-heat.

– It is possible to install a parachute “Junkers 500” softpack type. – The flaps control has a torsion pipe that causes a linkage between the kinematism on the right half-wing and on the left one. – By causing the flaps rotation, the extraction of the slats is carried out at the same time. – Both the high-lift device and the trim are electrically actionable. Moreover there is a mechanic control manually actionable that permits the operation of the high-lift device in case of emergency. 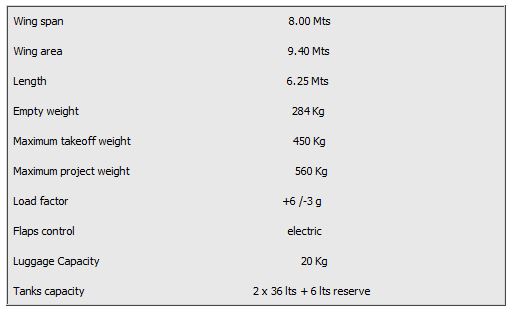