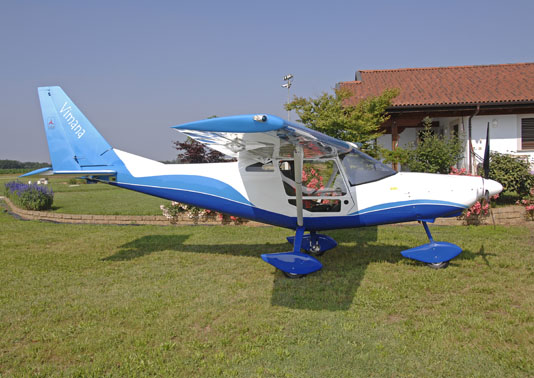 The Vimana® was shown in June 2006, during the most important aircraft fair of the year.
Extremely versatile and with attractive lines, this aircraft has become at once a new point of reference  for the passionate.
Fully planned by I.C.P., it is produced following the most strict safety canons.
The maximum comfort you can desire on an ultralight aircraft…

– The Vimana® is a monoplane type, with two side-by-side seats, fitted with a high wing supported by struts.
– The wings are trapezoidal with aerodynamic profile NACA 23015, provided with twist and dihedral and its lift system consists of slats on the leading edge and double-slot flap on the trailing one.
– The slats slide on 4 ways operated by the same amount of levers, which are handled by a torque tube.
– The horizontal empennage is tapered and consist of a fixed stabilizer and a moving balancer. Both the fixed part and the moving one are carried out in two half planes. The left balancer is provided with trim wing and motor located in the front housing of the elevator with position indicator.

– The two large lateral doors allow an easy independent access to the cabin.
– The cockpit is completely sound insulated, with lining with upholstery or fitted carpet.
– Excellent visibility thanks to the doors fully transparent.
– The seats are in skin and side by side type.
– The rudder pedals is adjustable.
– Double controls are part of the Vimanas’ standard equipment.
– The luggage van, situated behind the seats and accessible during the flight, may contain up to 45 lbs (20 kilograms)
– It is possible to improve the cabin ventilation by using two rotating air scoops in the doors windows.
– Heating system with control on the dashboard.
– Cabin light.

– The tricycle type undercarriage is composed by a front steering wheel connected to the rudder bar and provided with shock absorber of the elastic type and by the main undercarriage composed by two Kevlar half leaf springs attached to a steel crossmember passing into the fuselage.
– The braking action is exerted by disk brakes with hydraulic pliers operating on the main undercarriage wheels. The brakes are independent on the two wheels and are controlled by exerting a pressure on the pedals.

– The aircraft is equipped  with engine Rotax 912 ULS 100 Hp with clutch and potentiated starter.
– The propeller is an Ivoprop three-bladed with variable pitch in flight or a Kaspar KA1/3 LA with variable pitch in flight too (optional).
– Air box with filter .
– The engine cowling is completely removable to permit an easier engine van inspection.
– The fuel system is provided with an additional electric pump shielded anti-heat.
– The fuel system is equipped with two tanks installed into the wings and contain 36 lt. capacity each. The tanks are communicating and flow into a collection sump, placed in the fuselage, provided with drain valve and with fuel reserve indicator connected to a push-to-test light.
– Sight fuel level gauge on the left wing.
– Return circuit of fuel (anti vapor look)

– It’s possible to install a parachute “Junkers 500” softpack type.
– The flaps control has a torsion pipe that cause a linkage between the kinematism on the right half-wing and on the left one.
– By causing the flaps rotation, the extraction of the slats is carried out at the same time.
– Both the high-lift device and the trim are electrically actionable. Moreover there is a mechanic control manually actionable that permits the operation of the high-lift device in case of emergency. 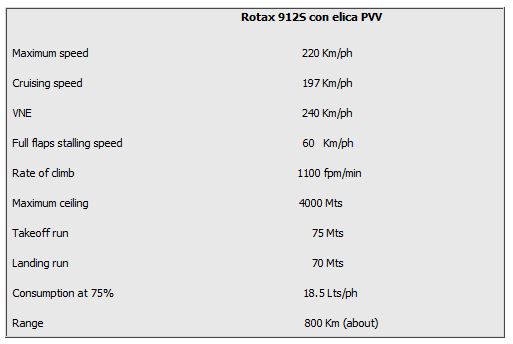